Embellish the upper body without fatty tissue and mammary glands

In men, the shape of the breasts can become feminized. The male breast (gynecomastia) is very common. Almost half of all men have a male breast.

There are two types of male breasts. There is the real gynecomastia (increase of the mammary gland) and the false gynecomastia (lipomastia, increase of fatty tissue). Mixed forms are common.

False gynecomastia (pseudogynecomastia) is either congenital or influenced by lifestyle. 90% of enlarged male breasts are caused by overweight. In cases of severe overweight, the fat also deposits in the male breast.

Fat tumours (lipomas) can also be the cause of incorrect gynaecomastia. With diet, sport and targeted training of the breast muscles, this male breast can be improved optically quite well.

Genuine gynecomastia involves the enlargement of the breast by means of an increase in glandular tissue. Breast growth in men can occur either on one or both sides.

Aesthetic problem of the male breast

Severe pain is rather rare with enlarged mammary glands. However, patients with gynecomastia are not able to influence the shape of the enlarged breast.

The aesthetic problem of the male breast often becomes a psychological burden.

Liposuction is a good way to reduce the male breast and give the silhouette a masculine contour. With a surgical removal of the glandular tissue, a permanent improvement of the male breast can be achieved.

Reduction of the male breast 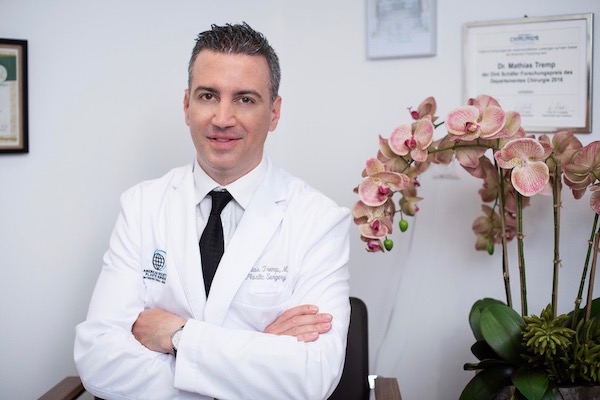 Do you have any questions about therapies for male breast cancer?
Make an appointment for a consultation.

During a consultation you will be informed by PD. Dr. med. Mathias Tremp will inform you completely about the intervention, possible risks and the feasibility of the desired correction.

In most cases the exact cause of the pathological enlargement is not entirely clear. Hormonal disorders or certain medications can be the cause of gynaecomastia and enlargement of the mammary gland.

A real gynecomastia is not always pathological. Often gynaecomastia develops during puberty due to an enlargement of the existing mammary gland.

A fake gynecomastia is caused by overweight. In this case, more fatty tissue is developed on the pectoral muscle and around the nipple.

Which men are suitable for male breast surgery?

In principle, all men who suffer from a breast that is considered too large are eligible for treatment. The operation of the male breast is a purely aesthetic correction.

An important prerequisite before every procedure is a detailed consultation to enable the patient to have the best possible expectations. Correction is not recommended for young patients. Boys' breasts can regress independently after puberty.

Liposuction for the fake male breast

Liposuction on men's breasts can remove fat deposits that usually do not disappear with exercise. Together with an optimal diet, the results are long-lasting.

In liposuction, the breast area is injected with a special solution that facilitates the subsequent suction of the fatty tissue. Depending on the size of the male breast, liposuction can be performed under local or general anesthesia.

We use the most modern suction technology and vibration technology (Microaire®). This method is mainly used in regions that are difficult to extract.

Genuine gynecomastia in men can be treated in different ways after a diagnosis.

Hormonal abnormalities can usually be treated with medication. A change in diet and exercise can also lead to the desired success

If the therapies do not bring improvement, the glandular tissue of the breast and surrounding fat can be surgically removed (andromastectomy).

Gynecomastia is treated by suction and removal of glandular tissue with a scalpel.

If there is pure fat storage, the excess fatty tissue is suctioned off (liposuction). After the cosmetic result of the liposuction is achieved, the skin section is closed. 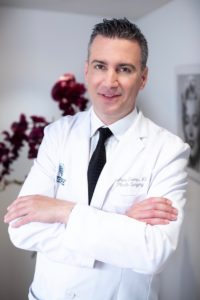 The incision is usually crescent-shaped around the atrium in the lower part. In addition, a tube is inserted for 48 hours to allow the wound fluid to drain away.

The excess mammary gland tissue is removed through this incision.

The procedure can be performed under local or general anesthesia. The operation is usually performed on an outpatient basis. After 5 to 7 days, the patient can resume normal work.

After treatment, patients wear a Gilit for 4 weeks to compress the breast. Physical activities are allowed 4 weeks after the surgery.

The costs vary according to the effort involved and are discussed and defined individually with the patient in advance. The costs include all measures such as preliminary consultation, operation, anaesthesia, medication, stays and follow-up checks.